ANN ARBOR, Mich. – Working with partners in Ohio and Wisconsin, engineers at LimnoTech have deployed the first low-power, long-range wireless sensor network solely focused on monitoring environmental conditions across the Great Lakes. Demonstration sites in Milwaukee, Wisconsin and Sandusky, Ohio will serve as testbeds for a new class of environmental sensors that are reshaping how scientists and citizen groups monitor the condition and health of streams, rivers and lakes.

The demonstration site in Ohio covers a large portion of Sandusky Bay, a broad, shallow embayment of Lake Erie that is plagued annually with harmful algal blooms and turbid, muddy waters. LimnoTech collaborated with the Cleveland Water Alliance, Bowling Green State University (BGSU) and the Ohio Department of Natural Resources on the deployment. Sensors are currently monitoring water levels, water currents, weather conditions and water quality. The new wireless sensor network will allow researchers and managers to deploy sensors at a lower cost and readily share data across multiple projects within the bay.

Dr. George Bullerjahn, director of the Center for Fresh Waters and Human Health at BGSU, was onsite last month when the first sensors to utilize the new gateway were deployed. He believes the new network changes how freshwater research is conducted. “This new network really opens up a whole new way to conduct research on Sandusky Bay,” said Bullerjahn. “Instead of focusing our efforts on one or two locations, we can deploy dozens if not hundreds of sensors across the Bay to truly understand conditions.” The sensor network will be useful as the State of Ohio gears up for massive investments in water restoration projects as part of its Sandusky Bay and H2Ohio Initiatives. 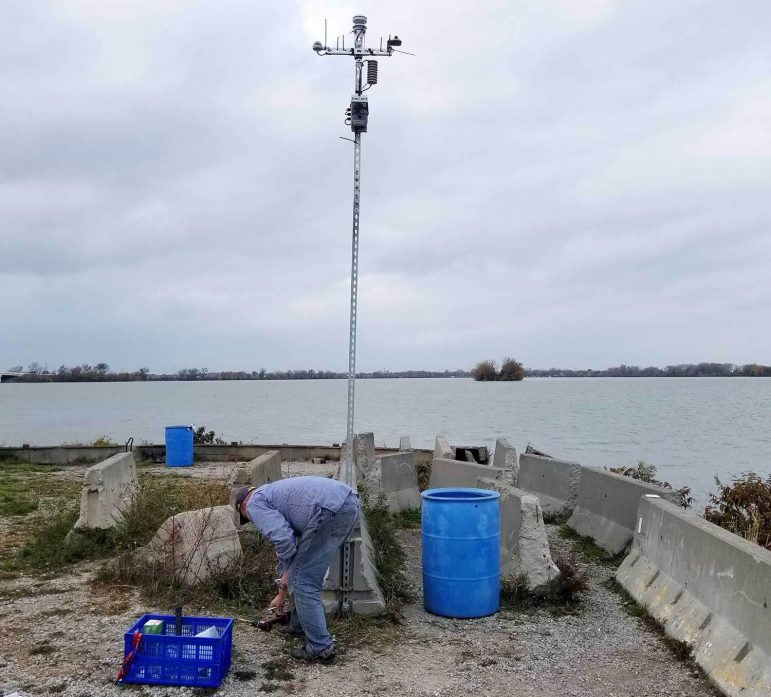 Bob Betz, environmental scientist at LimnoTech, installing a weather station at Sandusky Bay that will send data to the wireless sensor network.

The new technology allows anyone to contribute to the regional monitoring network and share data with managers and others in real-time. The Cleveland Water Alliance, a Cleveland-area non-profit, is looking forward to using the new network for upcoming citizen science projects. “Monitoring the health and condition of our region’s rivers and lakes is everyone’s responsibility, and our new project will teach residents how to use the latest water monitoring technology,” said Bryan Stubbs, executive director of the Alliance. “Collaborating on the sensor network will allow residents to deploy their own sensors, much like folks do now with backyard weather stations. This is very cool technology.”

In Milwaukee, the new wireless sensor network blankets the entire Port of Milwaukee, the EPA-designated Milwaukee Estuary Area of Concern and areas of Lake Michigan up to 10 miles offshore. The gateway was deployed last week in collaboration with the University of Wisconsin-Milwaukee’s Schools of Freshwater Science and Public Health. Dr. Todd Miller, assistant professor in the School of Public Health, will utilize the network in his research of Milwaukee beaches and is looking to expand coverage to sites in Green Bay as well.

“The cost to monitor the health of our region’s waters has to come down,” said Miller. “We know very little about temporal and spatial trends in contaminants and toxins, and access to affordable real-time data about water quality conditions is vital to inform managers and health officials. The idea that we can un-tether ourselves from expensive cellular data contracts and freely transmit data from every environmental sensor is fantastic,” said Miller, after looking out across the roof of the old Allen Bradley automation factory, now home to the School of Freshwater Science where the new gateway was installed.

The water technology accelerator serving the world’s water tech hub, The Water Council, is also pleased that one of the demonstration sites is located in its own backyard. “It’s fitting that an old factory site in Milwaukee is now at the cutting-edge of water technology and serving as the base station for this new water sensor network for the region,” said Stacy Stevens, Vice President of marketing and communications for The Water Council. “On behalf of our global members, we’re looking forward to working with researchers and companies to maximize this new network’s impact,” said Stevens.

LimnoTech will continue testing the new wireless sensor networks this winter and has plans for future expansion of the network at agricultural sites in Ohio and at locations along the Great Lakes in Toledo, Cleveland and western Michigan. “We’re hoping that these new open-access wireless networks foster a community of water-centric users that want to share data and ideas regardless of who they work for or what project they’re working on,” said Ed Verhamme, environmental engineer at LimnoTech and Vice President of the International Association for Great Lakes Research. “With this new network anyone can build their own, or order a $50 sensor, scan a QR code to get it online, and it can transmit water data for up to 10 years within a 10 to 20 mile radius of the base station. It’s really remarkable what’s available now to be used in the next generation of monitoring and restoration projects,” added Verhamme.

LimnoTech is one of the country’s leading water sciences and environmental engineering consulting firms. Founded in 1975, the employee-owned company is headquartered in Ann Arbor, Michigan.

For more information on the wireless sensor network, contact: