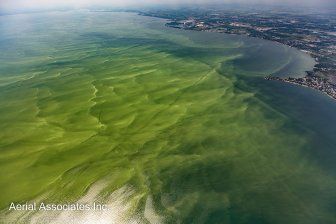 Nutrient pollution, drought, extreme storms, and warmer temperatures have led to the emergence of toxic and nuisance algal blooms in coastal and freshwater systems.

These are just a few examples of what has been happening in all 50 states and most international countries.

Algal blooms in freshwater lakes and rivers impact water recreation (boating, swimming, and fishing); drinking water (taste and odor issues, toxins); pets, livestock, and wildlife (toxin-induced illnesses and deaths); and cooling water intakes (fouling). These “big” blooms have prompted water resource managers to seek assistance. The costs associated with these blooms have run into the millions of dollars each year.

LimnoTech is contributing to research to improve the understanding of the causes and risks of algal blooms throughout the United States. Using a combination of field sampling, monitoring with water quality instruments, land data analysis, and computer-based modeling, we can simulate the conditions that cause blooms to devise strategies for reducing future outbreaks.

As environmental experts, LimnoTech has coupled science and engineering technology to develop a systematic approach for finding solutions for our clients to control or prevent the impacts algal blooms can have on recreation, drinking water, cooling water, ecosystems, and the economy.

Many blooms are triggered and sustained by unusual weather phenomena—high nutrient loads from flooding events, unusually warm summer temperatures, or winds that concentrate blooms at water intakes or beaches. Because we cannot control the weather, we focus on reducing nutrient loads that cause blooms by helping guide management decisions for urban and agricultural sources. Much of this decision support LimnoTech provides involves determining actions that will have the greatest return on investment—the biggest nutrient reduction “bang for the buck.”

Several recent developments should improve how we respond to algal blooms. The Harmful Algal Bloom and Hypoxia Research and Control Amendments Act of 2014 (HABHRCA) requires the National Oceanic and Atmospheric Administration (NOAA) and U.S. Environmental Protection Agency (USEPA) to advance the scientific understanding and ability to detect, monitor, assess, and predict HAB events. A 2017 HABHRCA reauthorization bill includes a provision for declaring HAB disasters for “Events of National Significance.” Another bill being considered by Congress is the Great Lakes and Fresh Water Algal Bloom Information Act, which would require NOAA to create a national database of research and information on freshwater HABs.

LimnoTech is working to advance our understanding of HABs and improve HAB detection, prediction, and response.

As efforts to manage the problems associated with HABs continue, LimnoTech will work with water resource managers to create early warning systems for HABs to protect human health. We are committed to find, implement, and monitor the effectiveness of solutions to reduce the negative consequences of future blooms.

John has worked as a consultant, researcher, educator, and science manager for over 30 years. Before coming to LimnoTech, John served as Deputy Director and Acting Director of NOAA’s Great Lakes Environmental Research Laboratory, as the NOAA Great Lakes Regional Team Lead, and as a research group leader with the Coastal and Marine Geology Program of the U.S. Geological Survey in Woods Hole, Massachusetts. His work has included the successful leadership of several projects involving large ecosystem restoration with a focus on nutrient reductions.