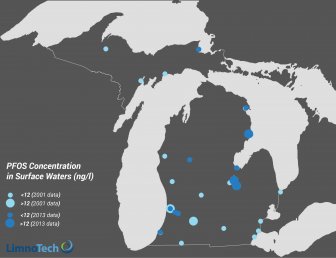 Map of PFOS concentrations below and above the 12 ng/L water quality criterion for two different time periods, 2001 and 2013. Data are from two Michigan Department of Environmental Quality (MDEQ) publications (MDEQ, 2003; MDEQ 2017).

We often hear the phrase “emerging chemicals of concern” when people talk about per- and polyfluoroalkyl substances (PFAS). However, “emerging” doesn’t mean these are new chemicals.

We often hear the phrase “emerging chemicals of concern” when people talk about per- and polyfluoroalkyl substances (PFAS). However, “emerging” doesn’t necessarily mean these are new chemicals. In fact, PFAS have been used widely in the industrial sector since the 1950s, which means these chemical compounds have probably been present in the environment since their first use over 60 years ago. What “emerging” really means, in this case, is that we now understand these chemicals may be of concern due to advances in analytical methods and new studies that indicate a potential threat to human health and the environment.

PFAS are a group of man-made chemicals that are used in many commercial and consumer products. Consumer products known to contain PFAS include waterproof clothing, cleaning products, stain-resistant carpet, and personal care products. PFAS can also be found in fire-fighting foams, chrome plating, and semiconductor coatings.

Researchers and government agencies have been measuring PFAS in the environment since the 1990s. Today, PFAS can be found in the soil, groundwater, sediments, surface water, air, and in the tissues of animals and humans. Two common types of PFAS, known as PFOS (perfluorooctane sulfonate) and PFOA (perfluorooctanoic acid), have been in the news lately. In late December of 2017, concentrations of PFOS and PFOA were found to be above EPA’s health advisory limit of 70 nanograms per liter (ng/l) in residential drinking water in northern Kent County, Michigan. A Wolverine Worldwide Tannery in Rockford, Michigan, where waterproof shoe leather was made, was identified as the source of PFAS. High concentrations of PFAS have also been found at airfields around the country, due to the use of firefighting foams as part of their operations.

The MDEQ conducted sampling in 2001 and 2013 to measure PFOS in Michigan surface waters. MDEQ sampled 28 surface water monitoring locations around the state for PFOS and PFOA. PFOS was found in the surface water at every location analyzed in the 2001 sampling effort, with mean concentrations ranging from less than 1 ng/l to 24 ng/l. It was not until 2014 that the State of Michigan developed water quality criteria for PFOS with a criterion of 11 ng/l for drinking water and a criterion of 12 ng/l for non-drinking water (e.g., fish consumption) for the protection of human health.

PFOS and PFOA are persistent in the environment, which means they do not generally break down. These chemicals can accumulate over time in humans and wildlife. There is evidence that exposure to PFAS can lead to adverse health effects.

In 2013, the MDEQ sampled Michigan surface waters again, including Clark’s Marsh in Oscoda, which receives drainage directly from the former Wurtsmith Air Force Base (WAFB). PFOS has been known to be a concern in groundwater at the WAFB since at least 1998. The 2013 sampling effort found a mean concentration of PFOS in Clark’s Marsh of 5,099 ng/l, which is more than 400 times the current Michigan water quality criteria. The next highest ranking sample location was the Flint River with a mean concentration of 51 ng/l. The Saginaw River was the only other sampling location found to exceed the water quality standard, with a mean PFOS concentration of 41 ng/l (see map above). 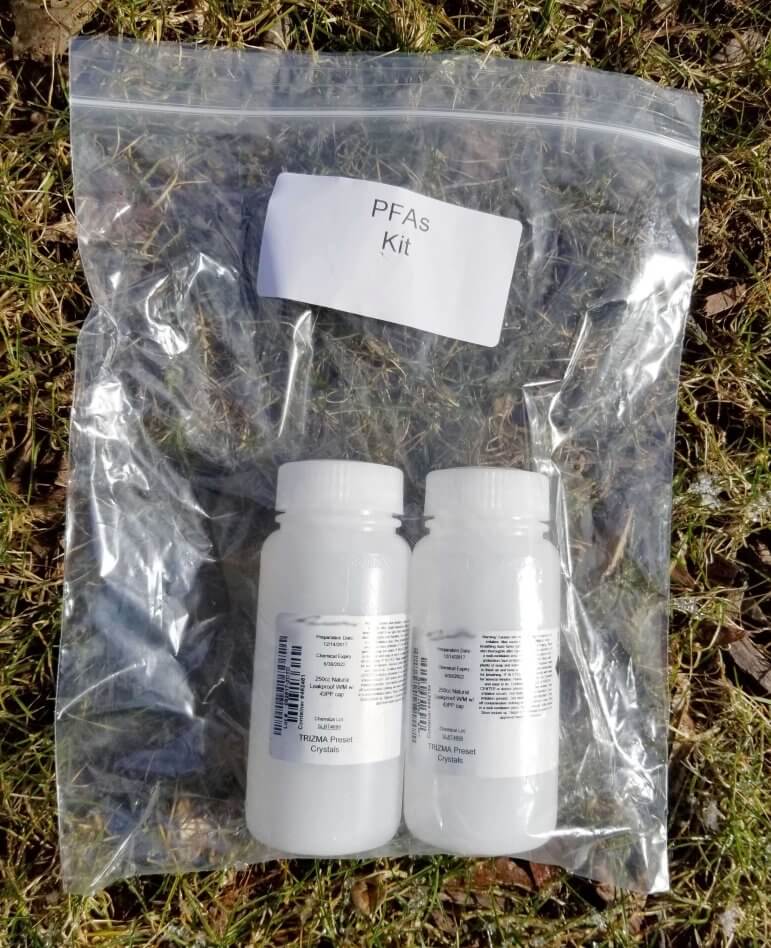 Since 2013, additional sampling for PFAS has been taking place around the State of Michigan as the MDEQ tries to identify problem areas and potential sources of contamination. As indicated by the PFOS data map above, we can expect PFAS to be found in more places than they are not, and that’s not likely to change for a long time due to the persistent nature of these chemicals. Michigan is not alone in dealing with PFAS contamination issues – PFAS are being detected across the U.S. and around the globe. Emerging chemicals like PFAS are complex and pose a challenge, but with the right expertise these challenges can be met and overcome.

For more general information on PFAS, we recommend the following resources:

If you want to discuss your PFAS-related problem, please feel free to contact me at sbell@limno.com.

Scott Bell , PE, BCEE, is a senior environmental engineer and Vice President at LimnoTech. Scott has extensive experience in water resources engineering analysis and has been with LimnoTech since 1992. In addition to managing staff, projects, and clients, Scott has technical expertise in environmental remediation and restoration, hydrologic and hydraulic engineering, wastewater discharge impact analysis and mitigation, and stormwater management. He has planned and executed water resource projects on water bodies across the country including the Great Lakes, the Gulf of Mexico, the Atlantic and Pacific Oceans, and several dozen inland waterways and water bodies. He is currently supporting industrial and civilian aviation clients in Michigan with their PFAS-related problems. In addition to his work with LimnoTech, he has been an adjunct lecturer in environmental engineering design at the University of Michigan, has delivered numerous papers and presentations, and has served on professional boards and committees. Scott can be contacted at sbell@limno.com.