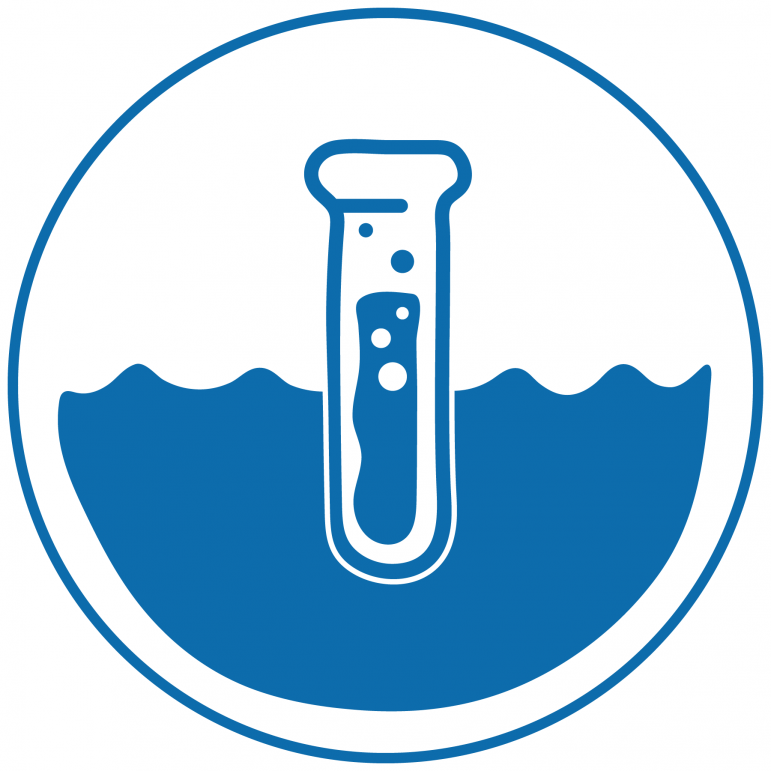 It’s not just that more states are promulgating PFAS standards but that the standards are getting lower and lower. However, as regulatory standards go lower, they are getting closer and closer to the current analytical detection limits achievable by most laboratories.

In the absence of Federally promulgated standards for per- and polyfluoroalkyl substances (PFAS) in drinking water, several states have taken it upon themselves to establish their own regulatory screening values for PFAS in drinking water. In the last few years, the screening levels seem to be getting lower and lower. In 2018, New Jersey established the first drinking water maximum contaminant level (MCL) for PFAS in the country. New Jersey’s MCL is for perfluorononanoic acid (PFNA) and was set at 13 nanograms per liter (ng/L), which is only slightly higher than the current analytical detection limits achievable by most laboratories.

As I write this, Michigan is conducting a series of public hearings on proposed MCLs for the seven PFAS listed in the table below. Michigan had previously relied on the Federal health advisory levels (HALs) of 70 ng/L established for perfluorooctanesulfonic acid (PFOS) and perfluorooctanoic acid (PFOA), but in the absence of federally promulgated MCLs for PFAS compounds, the State initiated their own MCL development. 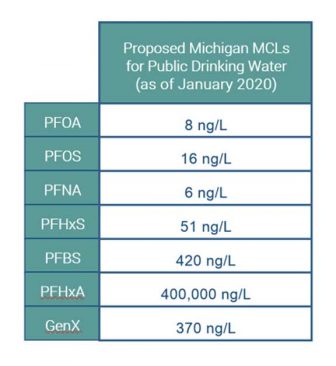 Note: ng/L and parts per trillion (ppt) are equivalent where 1 ng/L = 1 ppt

The new draft PFAS rules, which include these recommended MCLs, were published in the January 10, 2020 issue of the Michigan Register. With all public comments due by the end of January, it’s possible that a final rule could be adopted in the first half of 2020. If a final rule is promulgated, it would require routine sampling and reporting for 2,700 community and non-community water supplies in the State. Based on previous statewide sampling performed by the State, they estimate that 22 water supply systems would need to implement treatment for PFAS. The State also concluded that the cost imposed on those water providers was “worth the benefit to the citizens of Michigan,” according to an informational presentation at a January 8, 2020 public hearing.

According to Steve Sliver, executive director of the Michigan PFAS Action Response Team (MPART), which became a permanent unit within the Michigan Department of Environment, Great Lakes, and Energy (EGLE) in early 2019, “these proposed health-based values for PFAS in drinking water put Michigan on a path to potentially having some of the most advanced and far-reaching standards in the nation.”

If Michigan’s proposed PFAS drinking water MCLs become final, and if the State follows the pattern of other contaminants, it is likely that the new MCLs will be adopted as the groundwater cleanup standards for groundwater used as a drinking water source, under the State’s environmental cleanup law.

The trend towards lower PFAS standards is not limited to Michigan, as other states are also working on very low MCLs. Massachusetts, for example, published a proposed revision to state drinking water regulations that would establish a “total PFAS MCL” of 20 ng/L for six PFAS: PFOS, PFOA, perfluorohexanesulfonic acid (PFHxS), PFNA, perfluoroheptanoic acid (PFHpA), and perfluorodecanoic acid (PFDA). If passed, this “total PFAS MCL” would be compared to the sum of the concentrations of the six listed PFAS, which would establish a stricter standard than Michigan’s individual compound-based limits. The public comment period on Massachusetts’ proposed MCL opened on December 29, 2019. Massachusetts has also established cleanup standards for these six PFAS using the sum limit of 20 ng/L.

While the public health scientists tasked with determining these very low PFAS limits believe they are necessary for human health protection, there are some practical issues that need to be considered and will likely pose problems in the future. The first issue we face is the potential for sample cross-contamination during sampling or lab analysis. Because we need to test many compounds in water to the single-digit parts per trillion (ppt) concentration, even slight sample contamination from sampling materials, water used for equipment decontamination, or even from other samples in the lab that are placed in close proximity, could lead to a single-digit ppt result and a false positive. While careful sampling, performed in accordance with proper sampling protocols, can minimize the possibility of this occurring, the extremely low PFAS target concentrations make it impossible to guarantee that false negatives will not occur.

The other challenge is that, as regulatory standards go lower, they are getting closer to current laboratory reporting limits (i.e., RLs). A laboratory reporting limit is commonly defined as the lowest concentration at which a compound can be detected in a sample, and its concentration can be reported with a reasonable degree of accuracy and precision. As an example, we recently received testing results for a groundwater treatment system from a national laboratory certified by the Department of Defense (DOD) using the DOD Quality Systems Manual. The reporting limit for PFNA in our sample group was 3.7 ng/L. When you compare that reporting limit to the proposed Michigan MCL of 6 ng/L, you can see that we’re getting very close to what can be measured (see illustration below), and relatively small uncertainties in measurement or measurement interferences could create compliance issues and public/media misinterpretation of the data.

These potential issues are why sampling should be performed by knowledgeable, experienced personnel, and why appropriate quality assurance sampling and analytical laboratory selection are so important. As standards go lower, these factors will become even more critical.

If you have any questions about PFAS regulatory limits and standards or would like to discuss your PFAS-related needs, please feel free to contact me at sbell@limno.com.

This article is the seventh in a series of articles authored by LimnoTech staff on PFAS-related issues. Follow us on LinkedIn or Twitter (@LimnoTech), and check the News and Media page on our website for more information and updates. Links to the other PFAS articles in this series are provided below:

Aviation and PFAS – What’s the Connection?

PFAS – The Next Wastewater Utility Challenge?

Should Municipalities Worry About PFAS?

The latest publication of the LimnoTech Currents newsletter, PFAS – Like Nothing We’ve Seen Before, also focuses on PFAS and covers a range of topics, including aviation and AFFF, potential issues and areas of concern for municipalities, analysis methods and laboratory considerations, and current regulations.

Scott Bell, PE, is a senior environmental engineer and Vice President at LimnoTech, where he has worked since 1992. In addition to managing staff and projects, Scott has technical expertise in subsurface investigation, environmental remediation and restoration, and engineering feasibility studies. He currently leads LimnoTech’s PFAS response efforts and is supporting industrial, legal, business and civilian aviation clients across the country with their PFAS-related problems.